Thanks to visiting and citizen scientists, university students, and our staff, Jug Bay Wetlands Sanctuary has been able to gain valuable information about its diverse flora and fauna. With 17,000 acres of land including forests, meadows, wetlands, creeks, vernal pools, sand and pine barrens, we possess a rich natural environment that continues to welcome and invite scientists to come to Jug Bay and do research.

Research, monitoring, and citizen science projects currently active are listed below. Many of these projects are dependent on volunteer participation. Click on the links below to get involved and learn more about citizen science opportunities at Jug Bay. 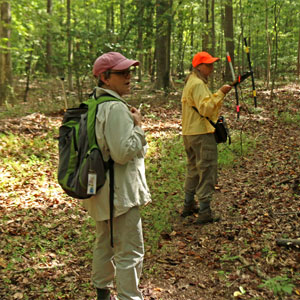 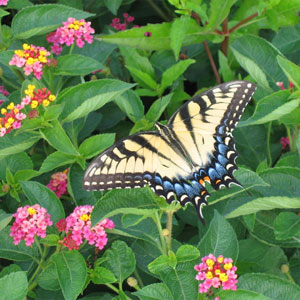 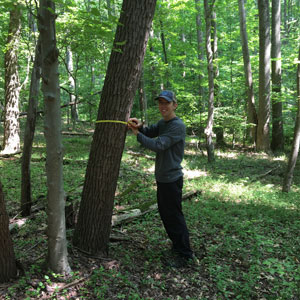 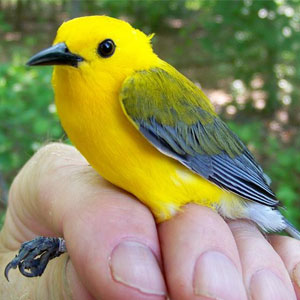 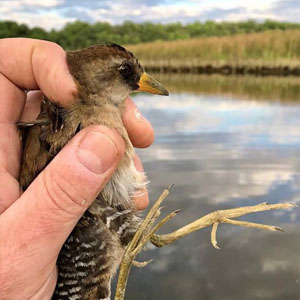 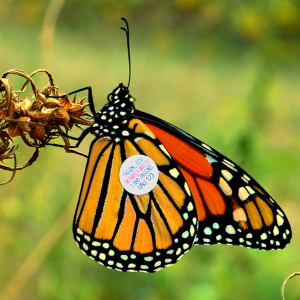 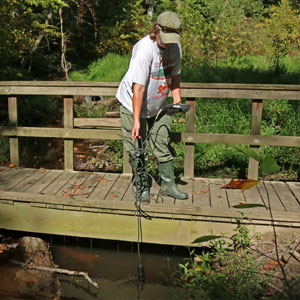 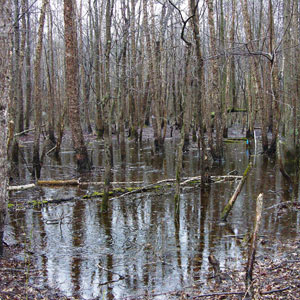 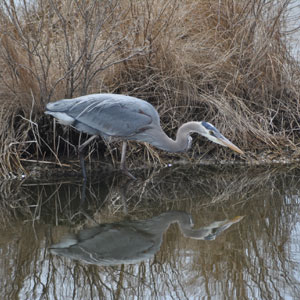 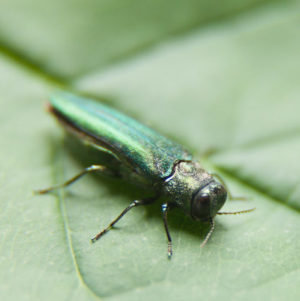 Want to get involved in our citizen science efforts?

"Immerse Yourself in Science and the Workings of Nature"

The Friends of Jug Bay and Jug Bay Wetlands Sanctuary support the Jug Bay Summer Internship Program. This program provides a hands-on opportunity for two undergraduate and graduate students to learn the tools of doing experiential research, no matter the subject or how simple the question.

With the guidance of a mentor, interns immerse themselves in research and education issues at Jug Bay for 12 weeks (June-August). During this time, interns learn how to design an experiment or project, apply sampling protocols, collect and analyze field data, write a report, and present their findings, as well as to promote our education goals through the development of new curriculum, film vignettes, and other education products. 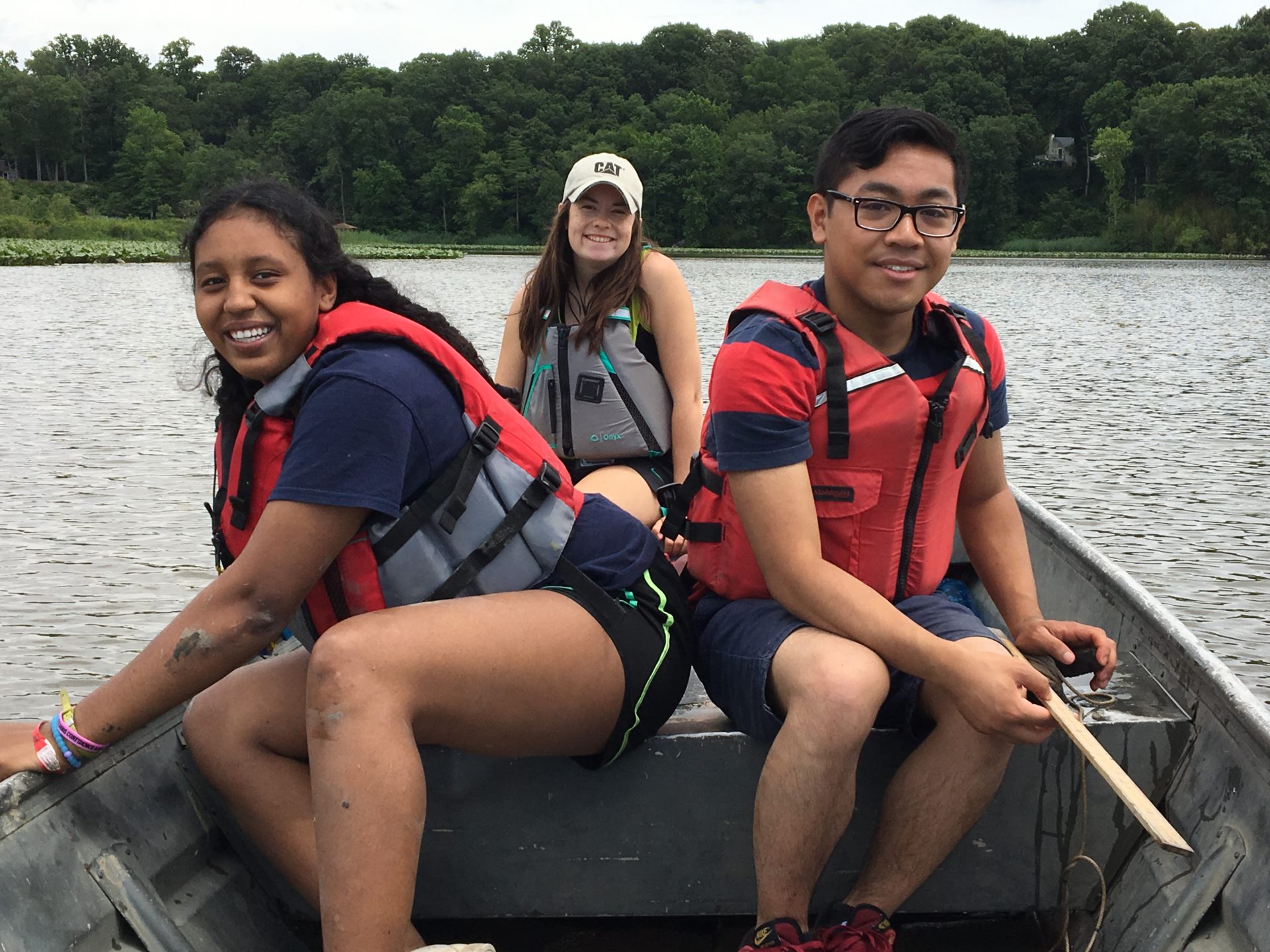 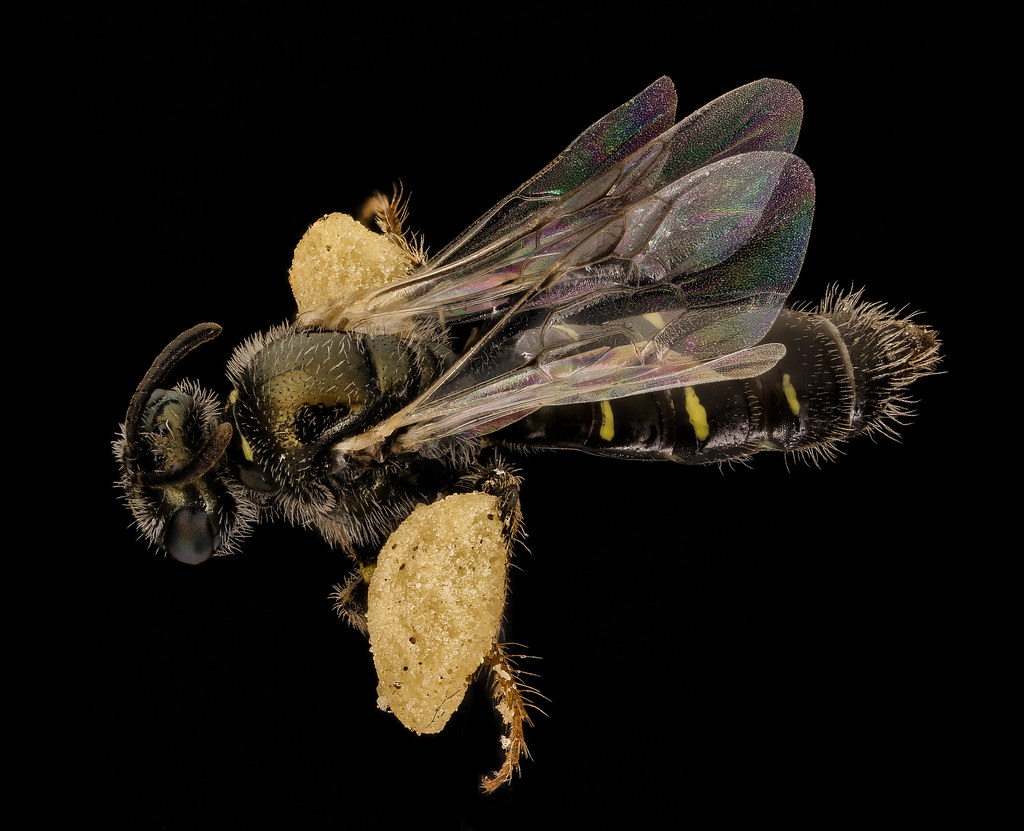 Perdita bradleyi, one of the bees caught in the sand
barrens habitat at Jug Bay, with pollen loads on her
hind legs. Photo by Sam Droege (USGS)

Jug Bay Wetlands Sanctuary is the home of a very unique habitat named sand barrens! Because of the nature of the deep sandy soils found in this habitat, water drains rapidly giving it the characteristics of a "micro-desert". This unusual soil type has led the local flora and fauna to be very different from surrounding areas. Because of this, this habitat has been the interest of scientists including Dr. Don Harvey (Department of Entomology, National Museum of Natural History) and his collaborator Dr. Timothy McMahon who are conducting a native bee survey at the sand barrens.

Their preliminary findings are exciting! Since the spring of 2018 Don and Timothy have found some rare and unusual species, but the most fascinating find so far is a large aggregation of nests of a very small bee, Perdita bradleyi, which has been found only once before in Maryland, in sand dunes on Maryland's Eastern Shore. The thousands of nests they found seem to be the largest nesting aggregation known. They have also found hundreds of the tiny, rare cleptoparasite Sphecodes brachycephalus flying over the nesting area of its host, Perdita. This bee, their rarest find so far, is a new record for Maryland. Both Don and Timothy expect their survey will turn up more surprises in the future!

The Box Turtle Habitat and Population Study, begun in 1995, is one of the longest running Citizen Science programs at the Sanctuary.  We have marked 605 turtles so that they can be easily identified when subsequently encountered. We now have more than 7,300 records of turtle sightings.

This year marked our 25th season of following turtles using both casual encounters and radio telemetry.  We observed 28 individual turtles, some more than once. That is on the low side as we have averaged 79 turtles a year over the course of the study, from a high of 156 in 2000 to a low of 25 in 2018.  The population is healthy, but our level of activity has declined.

We followed two turtles with radio transmitters mounted on their shells, one male and one female.  They didn't exhibit any new or different activity. Although they didn't move much, the female did make a brief excursion of approximately 200 meters to a nesting site.  Both turtles are now snug in their winter quarters.

Four of the turtles found and marked this year, all adults, were new to the project.  Interestingly, they were all found inside the boundary of our 80-hectare study area. By now we would have thought all the turtles resident in that area had been marked.   Another new turtle, a juvenile approximately 3 years old, was not marked as the shell was small and had not fully hardened (photo 1).

We also found the remains of four deceased turtles; two had died recently and two probably more than a year ago.  There were no visible injuries and no obvious causes for the mortalities. During the study we have found the remains of 64 turtles and it is probable that a considerably greater number of marked turtles have died in the 25 years since the study began. 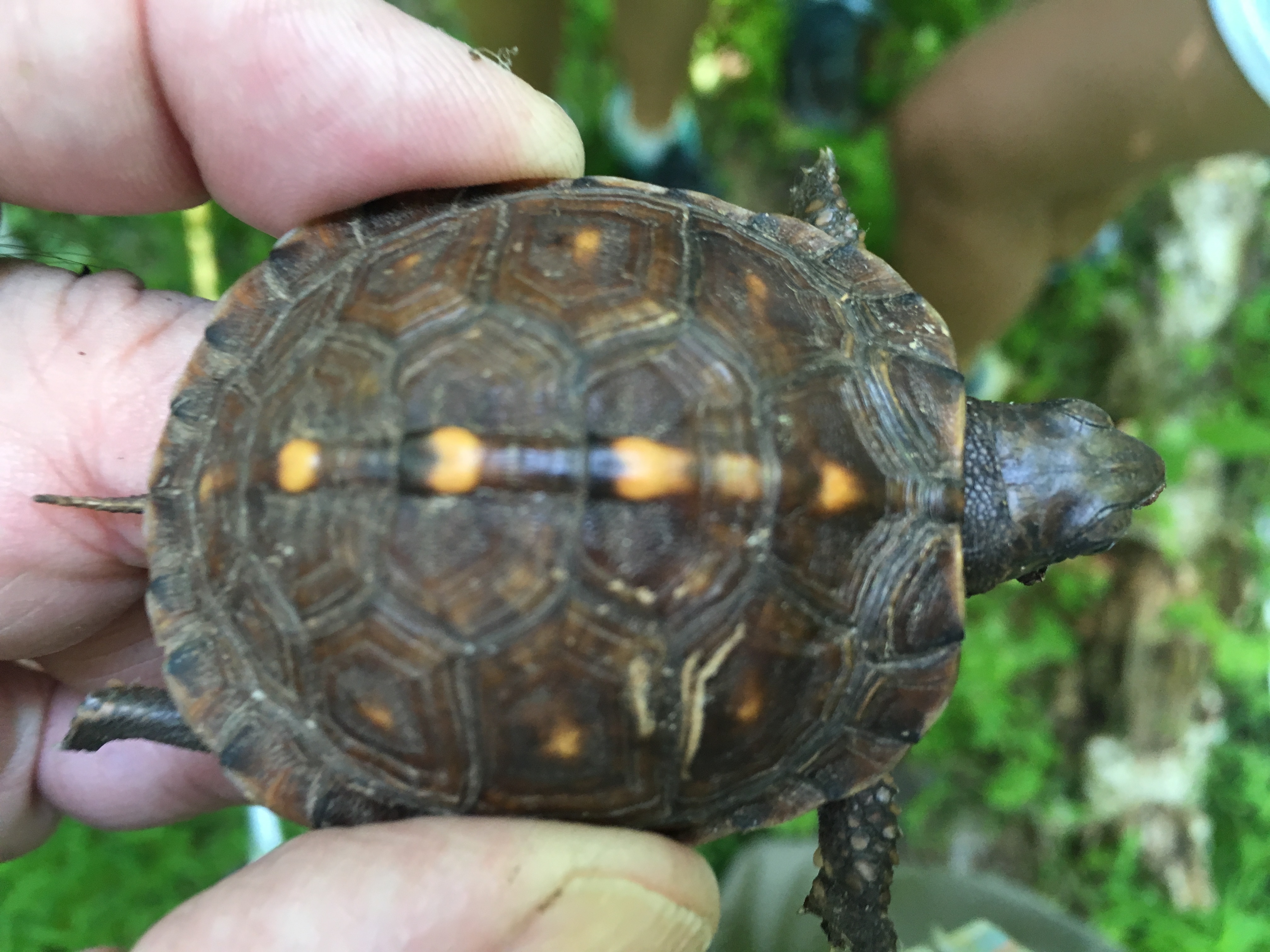 The capture of Male No. 187 two times, a turtle first marked in 1998.  At that time he was estimated to be more than 20 years old, so well over 40 now.  Seen 31 times prior to this season, he is a regular denizen of our MAPS banding site east of the Otter Point Trail, never straying far from home.  A large adult, he is readily recognized by his unusual eye color, orange with a white ring (photo 2). He is tied with Female No. 128, not seen this year, for the record for the number of years seen during the study at 19.

Male No. 85 was initially captured and marked in 1995, the first year of the study, tying him for the longest serving subject with a span of 25 years.  He was an old adult at capture, possibly 23-25 years old, making him possibly over 50 now. Still active and looking healthy, he is a candidate for the oldest known turtle in the study.

Male No. 101 was also first marked in 1995 and has been in the study for a record tying 25 years.  He was a juvenile when first captured, approximately 7-10 years old.

So even in a year with low results we saw new turtles, old friends, animals young and old, nesting and dead.  Life goes on at the Sanctuary. 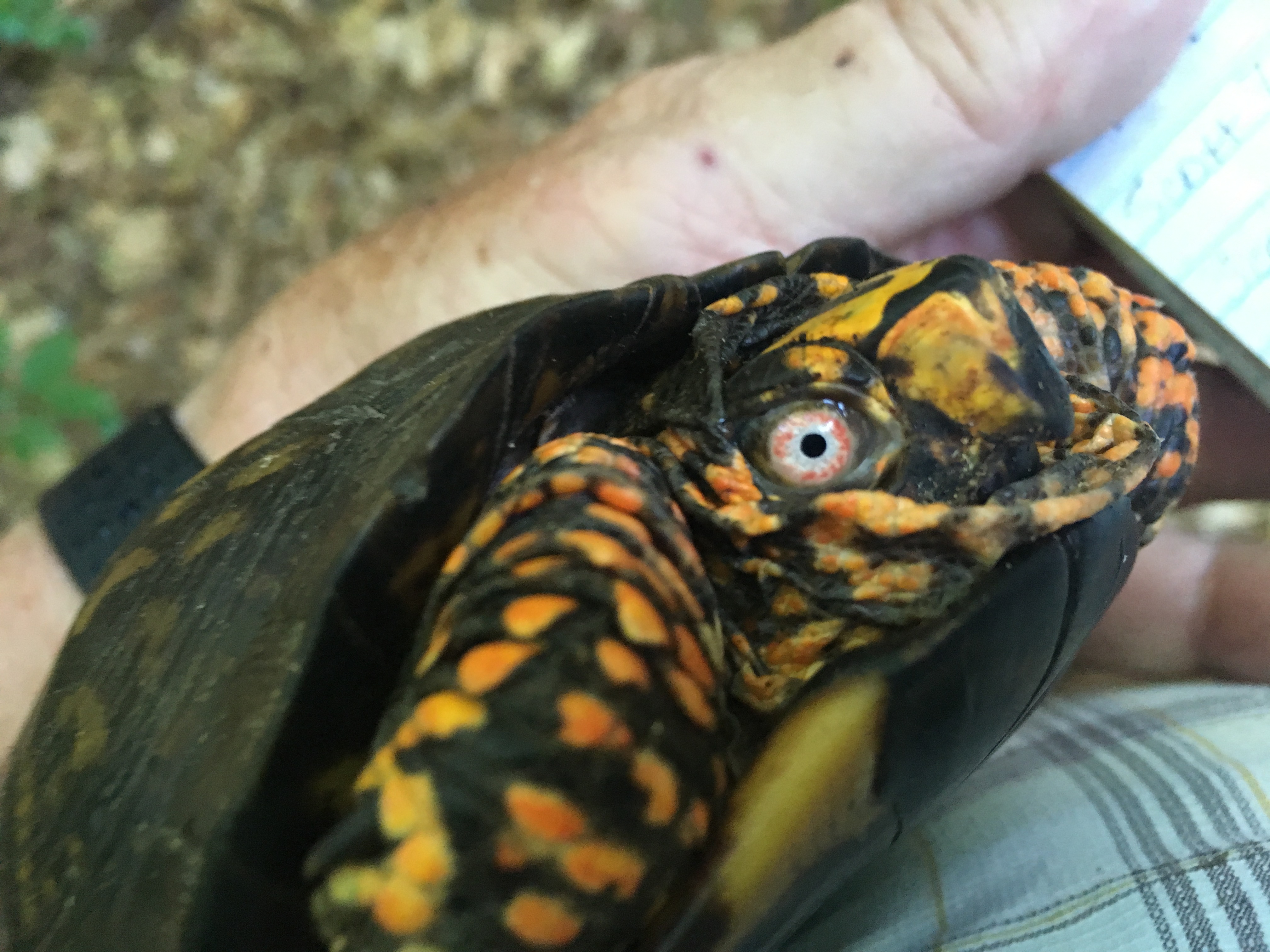 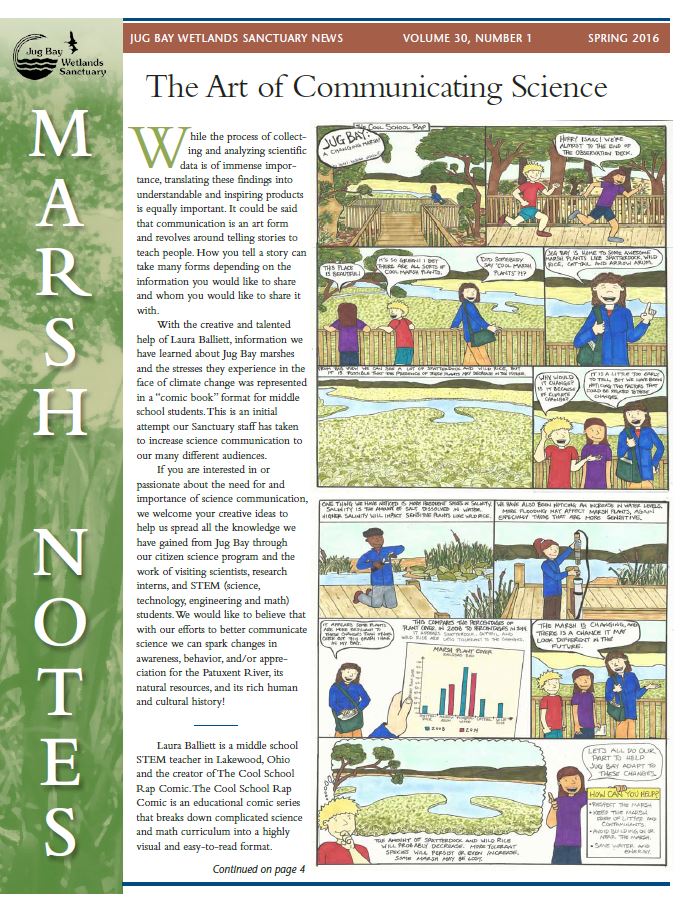 Since its establishment in 1985 many visiting and citizen scientists, students, and staff have contributed to increase the knowledge of our Sanctuary's many natural resources. To learn more about the species and habitats we care for and protect take a look at our species lists, technical reports, peer-reviewed publications, and the many issues of our own Marsh Notes Newsletter.

Want to do Research at Jug Bay Wetlands Sanctuary?

If you would like to come to Jug Bay and do research or set up a monitoring project you are welcome to fill out a request form and send it to Dr. Patricia Delgado, Park Superintendent/Wetland Ecologist, at rpdelg88@aacounty.org. We would be happy to support and facilitate your work the best we can.